For astronauts on the International Space Station, air quality is critical—even a small leak from a subsystem can expose them to harmful chemicals and endanger their health. Collecting air samples and analyzing them at a lab on the ground is impractical, and because the station’s air supply is recirculated continuously astronauts need a quick, accurate and reliable onboard air monitoring solution. 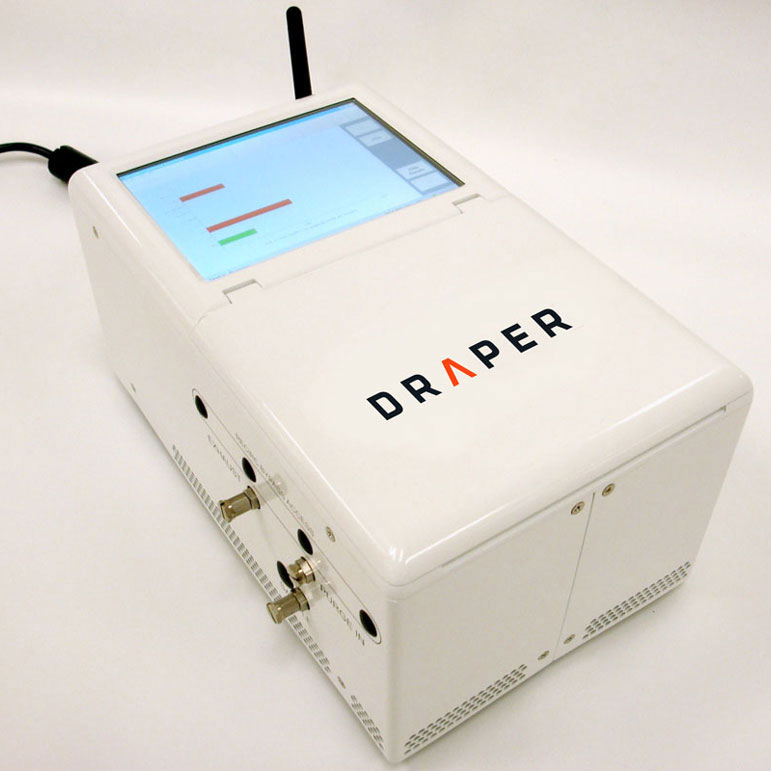 To measure volatile organic compounds in the cabin air of the Space Station, Draper developed a sensor system incorporating differential mobility spectrometry (DMS) technology and programmable compact gas chromatography. Draper’s microAnalyzer™ detects trace vapors in concentrations as low as a few parts per trillion. It’s portable and less expensive than a mass spectrometer, and it performs similarly high-quality measurements immediately. microAnalyzers were installed aboard the Space Station in 2009; enhanced models were installed and went into service in 2013.

Once the device is installed in the field, users can expand its detection capability remotely via wired or wireless communication, making Draper’s DMS device especially useful in hard-to-service locations.

In January 2015, incorrect pressure sensor readings from a coolant system on the International Space Station signaled a potential ammonia leak, a false alarm that forced NASA astronauts to put on oxygen masks, shut down nonessential equipment and evacuate the U.S. module of the Station. Draper’s microAnalyzer confirmed that there was no ammonia leak and that the air was safe to breathe, allowing the astronauts to return safely to the U.S. module.

The ability of the microAnalyzer to be operated remotely enabled controllers on the ground to use it to test the Space Station’s air. This functionality allowed crewmembers to stay in a safe location rather than having to operate the device themselves and potentially risk exposure to a harmful chemical in the environment of the U.S. module.

The microAnalyzer can be configured for different needs—its continuous air monitoring capability can alert warfighters and firefighters to toxins in the environment at the parts-per-billion level. Another form has a built-in sample concentrator and a gas chromatograph to detect chemicals at the parts-per-trillion level. The testing cycle is application-dependent and ranges from seconds to several minutes. Incorporating a liquid-to-vapor front end expands the microAnalyzer’s capabilities to test liquid samples. The microAnalyzer is extremely effective as a pre-filter for other types of detectors.

Draper’s microAnalyzer has applications beyond air quality monitoring. Human testing is underway at Brigham and Women’s Hospital, where the device is detecting a form of fungal infection in patient breath.